The cyclic boundary condition, also know as a periodic boundary condition, treats 2 boundary regions as if they are physically connected. They are used for repeated geometries , e.g. heat exchanger tube bundles. In versions of OpenFOAM before v2.0.0, a cyclic patch contained the faces for both regions of the boundary, i.e. cyclic behaviour was described with a single patch. In v2.0.0, however, the boundary regions are split into 2 separate patches that are linked to one another in the respective mesh file, e.g. boundary, blockMeshDict, through the keyword neighbourPatch. Each pair of connecting faces must have areas to within a tolerance given by the matchTolerance keyword. Faces do not need to be of the same orientation.

The syntax describing a cyclic condition in the boundary file of a mesh, prior to v2.0.0 may be as follows.

The syntax for an equivalent condition in the boundary file of a mesh in v2.0.0 would be as follows.

A foamUpgradeCyclics utility is available to convert a mesh with one of more cyclic boundary conditions of the old form, into the form for v2.0.0. 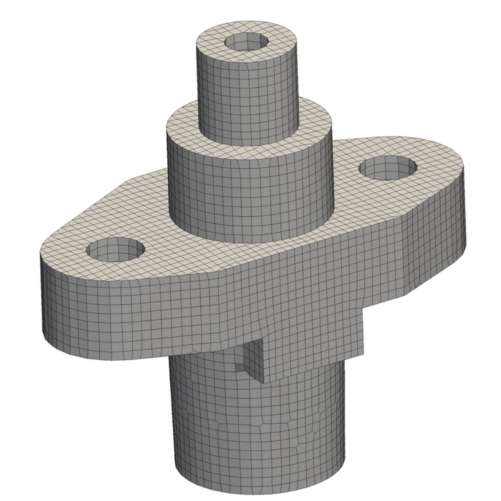 Additional changes to snappyHexMesh include the following:

The equivalent syntax in v2.0.0 would be as follows.

For simulations that use pointField, e.g. those that include mesh motion, recent changes improve parallel running and volPointInterpolation. The main change is that a pointField now operates effectively in parallel because points located on multiple processors are handled locally, with respect to the processors using the point, instead of handling all these points on the master processor (using globalPointPatch in earlier versions). Consequently, cases can now be decomposed, reconstructed and restarted without any limitation, and parallel simulations are faster.

In addition, a new cyclicSlip boundary condition has been introduced, particularly for mesh motion, that applies slip behaviour for point motion but which also keeps points on the cyclic in sync with those on its neighbour cyclic patch.

A new binary file format has been developed for reading and writing meshes. The change in format relates to optimising the reading and writing of lists of small lists, e.g. lists of faces and cells in a mesh, for which a special IO container class has been developed, named CompactIOList. The new class is similar to the IOList class but it is considerably faster when reading/writing binary format. Our tests showed an increase in speed of up to a factor of 5, giving up to a factor of 2 speed-up when reading in large meshes.