In previous versions of OpenFOAM, patch injection models would inject new parcels at locations between the centres of the boundary face and near-wall cells, leading to a parcel distribution with an ordered structure which would persist for some time unless dispersion was applied. In v2.3.0, particles injected at patches are randomly distributed across the patch faces, reducing ordering in the particle distribution considerably. The example below shows mesh geometry on the left, the centre image shows particle injection behaviour from v2.2.2, and the right shows the equivalent behaviour in v2.3.0. Ordering in the particle distribution, evidently based on the mesh structure in the centre images, is clearly removed in the images on the right. 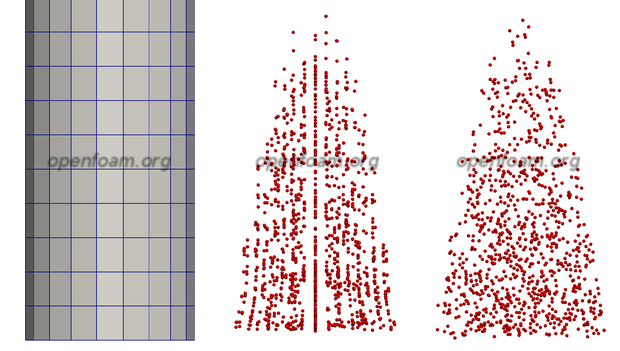 A new suppressionCollision collision model for the reacting multi-phase parcel has been added. This model can be used to deactivate the particle devolitisation and combustion models based on the outcome of an inter-particle collision event.

User-input has been simplified by requiring the user to specify only the constant properties used by the models that the user activates in the simulation. For example the verticalChannel example for the reactingParcelFoam tutorial now only uses the following constantProperties entries in the reactingCloud1Properties dictionary

Surface film modelling was first introduced in OpenFOAM v2.0.0 to predict the complex behaviour of thin films. In v2.3.0, the following new models are available.

In addition, a new indicator field, alpha can be used to identify where the film is present.

The local region, e.g. of the porous media, is specified in OpenFOAM using a cellZone. Previous versions of OpenFOAM supported only fixed, Cartesian co-ordinates for the cellZone, such that a single transformation was applied to the model properties for all cells within it. In the latest version, the user can ascribe a local cylindrical co-ordinate system to the cellZone, suitable when the directional bias of the properties follows the radial or circumferential directions.

In the second example, the local cylindrical coordinateSystem is specified by a coordinateRotation of type localAxesRotation. In this case, the user specifies: e3, the axis of rotation (z) of the local cylindrical coordinate system; and, the origin, from which the radial direction (r) is constructed by the vector from the origin to local cell centre. In this case, the viscous momentum sink (0 1e5 0) denotes a value of 1e5 in the circumferential direction (θ) and zero in the radial and axial directions.

Wall functions typically apply constraints to the near wall cells. For corner cells sharing more than one wall patch face, the value was previously assigned on the basis of the last wall to apply the condition wins. In v2.3.0 the corner values are now calculated using an average value, with contributions from all participating wall patches.

Soot formation and destruction is a complex chemical process involving many reaction steps, which has proved to be a difficult process to predict accurately. For industrial purposes simplified models have been used. This version includes the mixture fraction soot model which provides a simple one-step state model for soot prediction. The amount of soot produced is determined by a single step chemical reaction of fuel and oxidant, where the user specifies the soot yield.

Currently, the soot concentration is not considered into the thermodynamics of the system and it is not being independently transported by the flow but, instead, its spatial distribution is mapped on one of the products of the one-step combustion. The soot volume fraction is not taken into account as absorption mechanism for the radiation.

A new filmPyrolysisRadiativeCoupledMixed boundary condition has been implemented to provide thermal coupling between a solid region using a pyrolysis model and a fluid region using a film model. This BC takes into account the thickness of the liquid film on the solid wall in order to exchange heat either with the film or with the main fluid region. A radiative heat flux is included on the heat balance at the wall.